National Fire Prevention Week takes place from October 3-9. The theme for this year is “Serve Up Fire Safety in the Kitchen!” According to the NFPA, cooking fires are the number one cause of home fires and unattended cooking is the leading cause of fires in the kitchen. Often when panicked, people will grab the closest fire extinguisher to put out a fire. But using the wrong fire extinguisher could make the fire worse. Plus, untrained or panicked individuals typically discharge the fire extinguisher too close to the fire, causing the fire to spread.

The only thing worse than an untrained person is one who assumes they know the answers without having any solid information to back it up. These six common misconceptions have led to trouble for people in the past.

Practicing emergency evacuation is mandatory in the workplace. But how many workers know what to do at home? According to the National Fire Protection Association (NFPA), home fires cause 80% of civilian fire deaths. Here are some common misconceptions that people have about home fire safety.

I don’t need to rush, there’s more than enough time to get out when the alarm sounds.

This misconception could be based on an outdated fact. In the 1980s, you had approximately 17 minutes to get out of your home after the alarm sounded. But over time, construction materials have changed (like engineered lumber), making them more flammable and giving you less time to get out when there’s a fire. However, synthetic building materials are not the only cause for concern—modern furniture materials and home decor can go up in flames, quickly causing a flashover.

Due to modern materials, a house can now be fully engulfed in just under three minutes.

I should always investigate before I dial 911 when my smoke or carbon monoxide alarm goes off.

The abundance of nuisance alarms (false alarms from things like cooking in the kitchen or steam from the shower) makes people question whether any alarm is the real deal or not. If the nuisance alarms occur frequently, people may be tempted to remove the battery or unplug the alarm to keep it silent.

This could have grave consequences. It also leads to people being skeptical any time the alarm sounds. It’s common for people to want to investigate alarms in their home before calling emergency services, but it’s more important than ever for people to leave their belongings, evacuate and call for help once outside. A small flame will turn into a fire in less than 30 seconds, and carbon monoxide can be present without smoke or flames, so it’s important to evacuate first and call for help once you’re outside.

I don’t need to panic until I see flames.

When most people hear an alarm, their first thought is not to evacuate. In fact, most people don’t immediately think it’s an emergency at all, regardless of where the alarm sounds. The sound of the alarm is rarely sufficient enough to trigger evacuation—excess smoke and flames are often needed to make the alarm credible. The majority of fire-related deaths are due to smoke inhalation. A smoldering fire can go undetected a lot longer than a raging fire. In addition to carbon monoxide, smoke carries poisons, irritants and toxic substances that come from the burning of synthetic materials commonly found in the home.

This is especially dangerous when the smoke appears while everyone is sleeping. People often think that the smell of smoke will wake them up—but the reason we have smoke alarms is that the smell of smoke is unlikely to wake people out of their slumber. If the smoldering is not enough to activate the alarm, the carbon monoxide could overcome people while they’re sleeping, causing them to not wake up.

Carbon monoxide has a distinctive smell (I can smell it when the furnace is on)—I will recognize if carbon monoxide is affecting me.

Carbon monoxide is not detectable by human senses. It’s an odorless, colorless, tasteless gas, which is why it’s known as the silent killer. It does not cause burning eyes or coughing. The early symptoms of carbon monoxide poisoning could easily be attributed to other things, which causes people to ignore them. They include headache, fatigue, nausea and confusion.

As carbon monoxide poisoning progresses, the symptoms may include flu-like symptoms, body weakness, dizziness and even loss of consciousness. In order to prevent CO poisoning, all fuel-burning appliances, heating equipment and chimneys need to be inspected once a year by a professional.

Proper ventilation is a must and vents need to be clear at all times (especially from things like snow, leaves and lint). Being mindful of these symptoms, evacuate if you suspect carbon monoxide poisoning in yourself or others.

When the alarm detects CO, evacuate everyone (including pets) into the fresh air, call the fire department from outside and stay there until they arrive. This is why it’s so important to test the alarms (with everyone present so they know what the alarms sound like) and collectively practice the home evacuation procedure so that everyone in the house knows exactly what to do in the event of an emergency.

Having one smoke alarm in your house is enough.

Even with continual communication about the need for a smoke alarm on every level and outside sleeping areas, it’s surprising how many households only have one smoke alarm (or none at all).

NFPA requirements dictate that you should have smoke alarms inside every bedroom, outside all sleeping areas, and on every level of the home, including the basement. The larger the home, the more square footage to cover—meaning more alarms are required throughout.

Having a hard-wired smoke alarm means it doesn’t have to be tested.

Smoke and carbon monoxide alarms only have a shelf life of about 8–10 years, but it’s recommended that they are replaced every 5–7 years. Simply changing the batteries in a battery-operated alarm is not enough to ensure proper protection because while the battery may work, the alarm may not be functioning correctly. That’s why most detectors have a button that says, “Push to test weekly.” The same applies to a hard-wired alarm.

The most common reasons people give for not evacuating when alerted by an alarm include not hearing the alarm, failure to recognize the sound as the fire/carbon monoxide alarm, being unaware of the proper response, and lack of confidence in the system because of nuisance alarms. Education on the importance of smoke and carbon monoxide alarms can save lives. Unlike in the workplace, you’re the only one responsible for your safety at home.

October is National Protect Your Hearing Month. Noise-induced hearing loss is the most common type of hearing loss—grouped under the heading sensorineural hearing loss (inner ear nerves and hair cells are damaged)—and it affects 1 in 4 people.

Noise-induced hearing loss happens when you’re exposed to a noise that is too loud and that lasts too long. Exposure to sounds 85 decibels (dB) and above can damage your hearing (and that’s the level that OSHA regulations begin). The graphic below illustrates how common noises can impact your hearing. 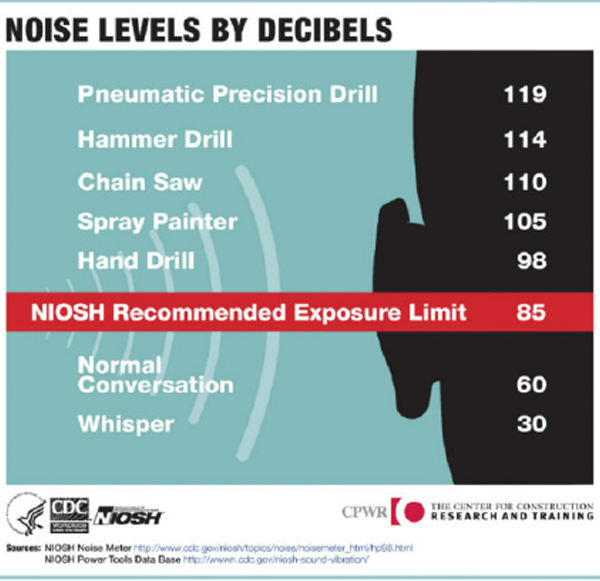 This type of hearing loss is permanent so it’s important for workers to protect their hearing whenever possible on a job site. A great toolbox topic on this subject should cover how to prevent noise-induced hearing loss, a discussion about loud areas or equipment your employees’ encounter, as well as best practices for different types of hearing protection.

Together, we can prevent hearing loss — help spread the word about National Protect Your Hearing Month!

This October, during National Protect Your Hearing Month, we are coming together to raise awareness about noise-induced hearing loss, and share easy steps that people can take to protect their hearing.

At CDC’s National Center for Environmental Health (NCEH), we are committed to educating young people about noise-induced hearing loss in order to help prevent it. According to a 2018 survey, more than 4 out of 5 American adults never, or very rarely, wear hearing protection at loud sports events or entertainment venues. Hearing loss from loud noise is permanent — and most people don’t notice their hearing is damaged until it’s too late.

You can make a difference! We’ve put together some tips and materials to help you spread the word. By sharing these messages on social media and beyond, you can help prevent noise-induced hearing loss during National Protect Your Hearing Month — and every month!

Use these talking points to communicate with young people about noise-related hearing loss:

•Over time, being around too much loud noise can make you lose your hearing

•Once you’ve lost your hearing, you can’t get it back

•Try to avoid loud noises — for example, by turning down the volume when using headphones,moving away from the speakers at a concert, or spending less time at a noisy restaurant

•Talk to your doctor if you are worried about your hearing

You can also encourage health care providers to talk with patients about their hearing during regular office visits, and ask how often they are around loud noises. Providers can offer hearing screening and refer patients for hearing tests and treatment if they suspect a problem.

Two types of hearing protection devices—earplugs or protective earmuffs—can help prevent hearing damage. Hearing protectors limit the level of sound. They do not block out all noise. Earplugs fit directly into the ear canal, the narrow passageway between the outer ear and the middle ear. They come in disposable and reusable options and in various sizes.

Protective earmuffs are easy-to-use, reusable, plastic cups that reduce noise by completely covering both ears. They come in sizes that fit most people. Earmuffs are easier than earplugs to wear correctly.