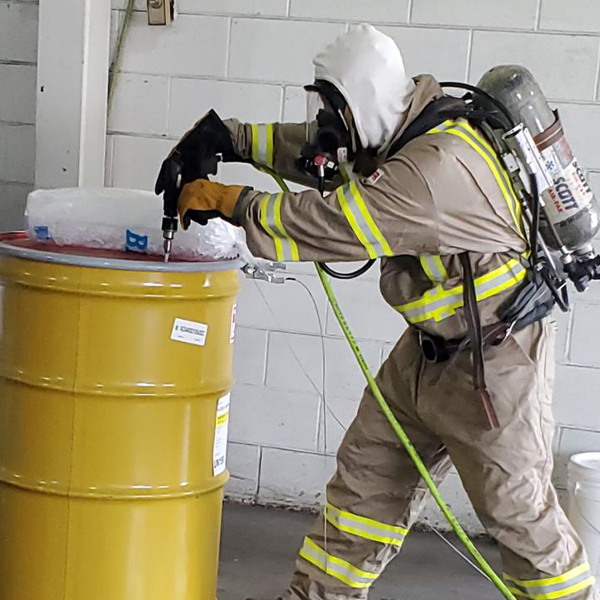 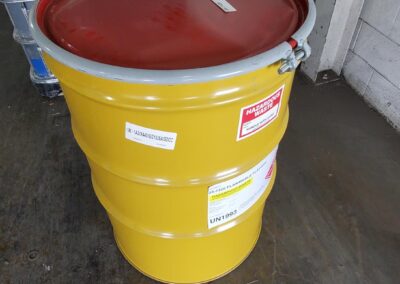 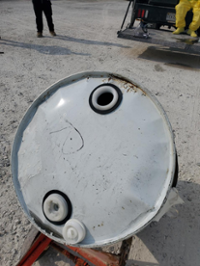 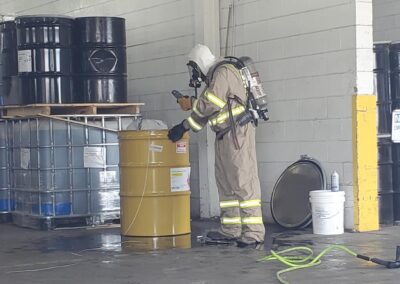 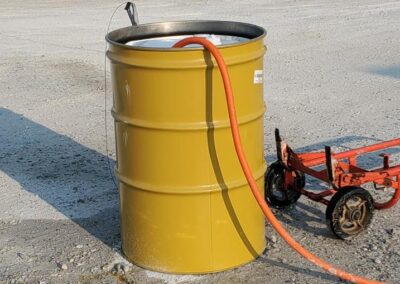 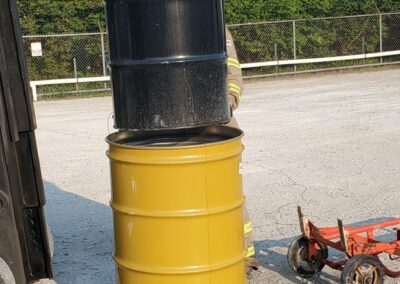 First Call Environmental, LLC Columbus, OH was recently requested to respond to an incident involving a bulging drum inside a facility. Upon arrival, the team discovered the drum was in fact a steel overpack that contained a 55 gallon drum inside. The team gathered all available information and began to set up for a pneumatic punch to relieve the pressure. The customer advised the inner drum contained flammable liquids. The team utilized FRC clothing and began to perform air monitoring to ensure there was a safe atmosphere to conduct the punch in. Without knowing the condition of the inner drum it was decided against moving prior to the punch. A surface temperature was taken on the drum as was noted as normal. The team placed some cooling packs on the drum to ensure there was no elevation in temperature and established a grounding field. A fire suppression line was also in place. Once prepared, the team entered with supplied air and began to drill the drum lid. Upon breakthrough, there was a significant release of pressure and an elevation of Hydrogen Sulfide readings. The crew backed out and allowed the drum to vent.

After venting for several minutes and a drop in the Hydrogen Sulfide readings, the team entered again to remove the lid of the over pack. The inner drum was observed as bulging as well. The cooling packs were moved to the inner drum and the process was repeated on the inner drum. Once through, high Hydrogen Sulfide readings were noted. The team once again backed out and allowed the drum to vent. The venting process caused very high readings of Hydrogen Sulfide. It was determined that the material inside the drum was a waste material and incompatibles had been mixed at some point. The drum was estimated to be about 40% full.

After a venting period, the team re-entered the area and placed a blow away plug on the drill hole. This would contain the release of the gasses and allow the team to relocate the drum to an outside and well ventilated area. Once relocated, the team sampled and tested the material. The team then adjusted the pH and balanced the contents to stabilize the material. Once complete and it was confirmed there was no further reaction taking place, the team overpacked the now stable drum and prepared it for proper disposal.

First Call Environmental should be your one source for any type of petroleum or hazardous materials incident. Our teams are trained and equipped to respond to any incident at any time. 800-646-1290 put you in direct contact with our senior leadership team 24/7.